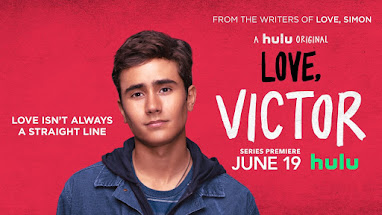 I have been watching this show on Hulu called "Love, Victor".  It's about the coming out process for a guy in high school.  For the first season Victor kept this secret to himself.  He struggled with his feelings and explored how others went through the process.  In the second season Victor has come out and has a bf.  Episode two is kind of a climactic event where he stands on a chair in the school hallway to come out to everyone and announce that he is with Benji.

His parents, especially his mom, are not comfortable with his sexuality.  When he brought Benji home for dinner she squirmed in discomfort and could barely look at them.

It's good there's a show like this to tell the story of a young gay man just coming to grips with his sexuality.  The reactions of his friends and family are an important part of the story.

The process is difficult for Victor, but it's certainly not horrible.  He is a good looking, Latino guy.   He's popular and athletic.  That makes a difference in how things play out.   A big difference.  My point is, while this show is the reality for some people, it's not reality for others.  For other, less popular people, the coming out process could go quite differently.

Another end of the spectrum might be the Tyler Clementi case.  He was the college freshman in NJ who was outed by his roommates, and subsequently jumped off the George Washington Bridge.  The reality is that he was a nerdy, violin player....certainly not captain of the football team or voted most popular senior.

I also need to point out that things are very different now than twenty or thirty years ago.  I remember the look of horror on my parents' faces when the topic of a gay person was brought up.  The acceptance is better than it was.  Better, but far from perfect.  If it was completely accepted then we wouldn't have over half the homeless street kids being LGBT refugees.

Why am I writing about this?  The contrast to my own life?  How I wish things could have been?  How different things are now?